Happy Birthday Verne Troyer! You’re the only Verne I’ve ever heard of, even though it’s a great name. I assume you were named after the writer. Ernest P. Worrell may have ruined it for subsequent new parents who would decline to call their baby after the rubber-faced man’s unseen friend, even with the added ‘e’. I hope the Dick Clark replacement doesn’t overshadow your celebration with promises of change leading to wayward resolutions. What was it like being the oldest in your class? Did you play any sports growing up? I hope you have a lovely year. 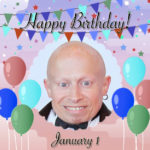 [April 22 edit: I hope you finally found what you were looking for, Verne. Rest peacefully.]

[Author’s September 15 note: This is obviously a very weak first celebrity birthday message, posted before I had any intention with the project other than finishing it. But when he died on April 21, there was a part of me that supposed my notes might have been closely connected to a wrathful destiny. If January 1 died soon after I wished him a happy birthday, who’s to say January 2 wouldn’t die soon after. Jack is 71, after all, almost reaching the lifespan of the average American zookeeper. And January 3, he’s overweight and an admitted alcoholic, so his death wouldn’t be the biggest surprise. And the realization of my foreboding messages would happen while 2018 is still going strong, and many Twitter celebrities are still awaiting a birth anniversary. Famous people would be deleting their accounts, pleading at me to end the madness. I wouldn’t, of course, and so I’d get called a serial killer on the TV and my life would be upended. It seems, though, that Verne is the only one who never made it to the new year, so my life remains simple and barely anyone calls me a murderer. So it goes.]