I live in Vancouver, at it’s about this time every year that I lament over the size of our country. You see, I’m from the east coast, all the way in the Sin Jawns, and I’m not afraid to say it would be purely lovely to spend a few days back there with old friends and old family and old traditions. Even though I rarely get to make the extravagrant trek across the continent anymore, I’m a Newfinlander, corn and bread, and I’ll be one till I’m dry.

It’s great living away as a Newfoundlander1 because other people sometimes assume you’re a bit dumb but that you like to have a good time with a few drinks. And if you think about the most fun nights of your life, you were probably hanging out with someone half dumb who likes gettin’ right on ‘er. Even if you aren’t dumb, and if you’re not that fun, these mainlanders have you built up in their head in this way where you have no choice but to act dumb and fun, for a story if nothing else, and then everyone has a laugh.

Everyone thinks people from Newfoundland are really nice too. It’s not that they’re wrong – a lot of us do come across as very friendly at first. But it’s because most people there are just bored. If you’re visiting from away, you can ask any random person on the street, “Hey, do you know where Cape Spear is?” and they’ll jump all over it. “Do I? Sure I’ll take you! I got literally nothin’ else to do! We might see whales sure!” And then all they do is complain the whole way there, about things nobody ever asked them. “Sure you knows my nephew? He’s some brat!” Even though there’s no absolutely way the person knows her nephew, and even if he is a bit of a brat.

I find that Newfoundlanders always state the obvious. They hate silence, so they need to say something any time anything happens, no matter how inconsequential. If you hear an ambulance go by, the person with you is bound to say, ”Looks like someone’s goin’ to the hospital.” And you’re supposed to just nod along and agree with them. If you respond in any other way they’ll think that you’re the arsehole, but goosh, give me a break.

We do like having a good time, but sometimes it’s based on nothing. My mom will laugh throughout an entire phone conversation where nothing remotely funny is being said on either end. Or she’ll get overly excited and lose all sense of time and space. “Jane! Great, Jane! How are you doing, Jane? Right right right right right. Well, nice talking to you, Jane.” Then she’ll hang up and say all excited, “Guess who that was!?”

Every time I call my parents, they are absolutely blown away by the time difference. Every time. “What time is it there?” “4:30, Dad.” “It’s not! Sure it’s almost 9:00 here! Wait, AM or PM? Is it still Saturday?” And after he gets over that, it’s straight to talking about the weather. “What’s it like outside? It’s raining here.” “It doesn’t matter, Dad. The weather here is entirely independent of yours.”

All the same, why does the weatherman in Newfoundland even bother to tell us what temperature it “is”, according to a thermometer or some other useless device, when they immediately follow it up with a much more relevant number to how you should prepare for the day. “It’s 10° here at the Wreckhouse. But I suppose with the windshield and all, it feels a bit more like negative 40.”

So that’s a few things about not being home that I use in an attempt to convince myself that I don’t mind living so far away, but it doesn’t really work, because for all the wind and the snow and the inherent racism and the garbage roads and the inaccessibility to the rest of the world, it’s pretty friggin’ special and I love it to pieces. 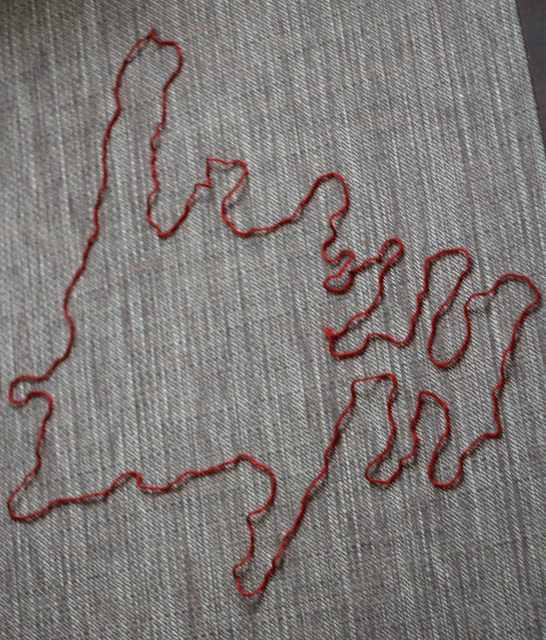 I had a dream a few days ago I wanted to share with you because you were nice enough to make a little cameo. So I’m in my yard in Vancouver playing with my dog Toast, and a dog outside the fence wants to play with him. His owner, who’s a bit of a skeet, brings him into the yard, and he’s carrying a gun, but it must be an open carry city because he’s half swinging it around without worrying too much about it. He lays his gun down and starts doing a legitimately impressive dance with his dog.

Suddenly we’re kind of throwing an impromptu party in the yard, just after an important function finished nearby, and many of the attendees – including artists, businesspeople and other dignitaries – happen to be here.

I overhear someone behind me go, “I visited Fligu a few weeks ago…” before trailing off. I laugh to myself, and a stranger approaches me. “What is it?” he asks?

Me: “Ah. Did you hear what that person said?”

Me: “Well he mentioned he’d been to Fligu3, this town up north. My friend Louie4 has this line, that half the towns in B.C. were named by Jack Black. I know it’s probably insensitive, but I don’t exactly know why.

The place is filling up quickly, and you, wearing a nice tuxedo, end up in our conversation circle.

You: “Do you know the story of the Kimayu people?”

When I hear your voice, I realize you were the one who had mentioned Fligu. You’re not chastising me for making fun of the name, but it seems like you do want to take the opportunity to inform me about the indigenous group5.

Me: “I actually don’t, and because of the joke I don’t really want to, because then I probably won’t find it funny anymore.”

A different stranger comes up to me like we’re friends.

Him: “Do you want any M before I leave?”

You (pointing at the beer in my hand as supporting evidence): “I knew it! Who was that girl, macking on you earlier?”

I look around and see Kelly nearby.

Me (intending to blow her mind that I’m kind of friends with you): “Kelly, this is Justin. You know, the prime minister.”

Justin Fong, who in the dream is the same height as you, has similar hair, and is also wearing a tux, is standing in the place where you were previously: “Smitty, man. No I’m not.”

I look around but can’t find you. I shrug it off and head inside. There’s a desk set up in the living room and lights pointing at the wall. A petite Russian grandmother sits down and begins making an intricate, incredible shadow scene on the wall by contorting her hands. There are three shadow people, a shadow clock, a shadow car, all interconnected on the wall. It’s absolutely incredible.

A drunk, obnoxious girl6  barrels up to the desk and starts making shadow figures next to the other woman. There’s another person nearby practising some basic figures, but it’s nowhere near as intrusive.

Russian woman (almost humbly): “I’m a storyteller. If everyone does not want to hear my story, I will step away.”

And so she does.

6 [think an older version of Lola from Big Mouth]