I’m watching television, where Hillary Duff’s character is getting caught driving drunk on the children’s show “Wroberts Roberts”.
I switch to the news and listen to the top story. Apparently, a Canadian astronaut isn’t allowed to go into space because of his poor health, possibly drug-related. However, he hacks into the system to get approved, but after he’s launched into orbit he gets stuck up there. The space agency won’t bring him back because of the hacking.

[Dreamor’s note: Both words in the show title are pronounced the same, as in the post title.] 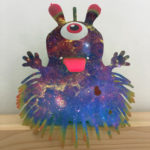