A man walks down a street. He sees another guy get ambushed and killed. He turns away quickly and doesn’t look back. The mobsters who did the ambushing and killing notice how well he dealt with the situation and commend him, going so far as to offer him a job.
A woman gets high and removes her clothes. She hears a noise and opens the door to find out where it’s coming from. Her umbrella blows away. She chases it into the backyard but eventually retreats when it gets too far away. Her dad comes to visit later, and it turns out he’s one of the mob guys.

[Dreamor’s note: I may have been the man mentioned in the first sentence, even though it’s written in the third.] 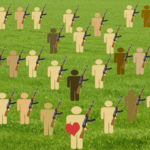