My mom bought me tickets to the orchestra, to go with two of my friends and some 45-year-old woman who turned out to be pretty drunk. In the lobby, I realize I have a contraband pocket watch on my person and that they’re being very strict about security, checking people thoroughly on the way into the theatre. I try to go outside to stash it, but they won’t let me leave. The show is starting so they try to usher me into the theatre.

I try hiding the watch on different parts of my body, including my wrist, but my fingers are quite fumbly. My clothing is not conducive to hiding anything, so eventually I stick it next to my butt, hoping security won’t touch butts. I walk very carefully towards the entrance, which is being manned by two young fellas who are just having a chat. Because I’m late, and the performance has already begun, they just wave me in without patting me down. Relieved, I walk past them, but one of them stops me. “Oh, hey man, we need to see your ticket.” It’s in my wallet, in my pocket, next to the precariously-placed pocket watch. I manage to get it out and show them. The drunk woman is standing nearby, on the inside of the theatre, half hitting on one of them, but mostly just being loud and obnoxious. I shush her. “Don’t tell me to shut up!” she yells back. We get into a mini argument, but I’m trying not to draw too much attention to us.

As I make my way to my seat, near the front, I reach to get the watch. My fumbly fingers being what they are, it slips out of my hand and tumbles all the way down to the orchestra level. It lands at the feet of the conductor, Victor Garber, who stops the show and bends over to pick it up. He’s about to pass it back, not too concerned that the show was interrupted, but as he’s handing it to me he realizes what it is. 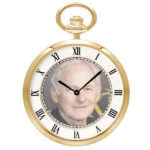