I look up and see that Rahm Emanuel, in the form of Wendell Pierce, has arrived at the construction site in which I’m working on a project for the city. He has just been re-elected mayor of Chicago, and so he’s ordered a delay in tearing down a specific fence, because he doesn’t want the construction site to interfere with his victory parade. However, the project had already begun, and so my team is tasked with rebuilding part of the fence temporarily, very quickly. Another worker complains that the fence we are erecting is too heavy and not strong enough, primarily because it is made out of half plastic and half concrete. Rahm yells at him for complaining, then yells at all of us for being too slow, and then yells at a different worker for getting his $3000 suit dirty. I stand up for the worker, telling the mayor that nobody gives a shit about his $8000 suit, to which Rahm counters, “That’s the problem with you people. You’ll say whatever you want to anyone, with no respect for people better than you.” The two of us get into a shouting match and his assistant hauls him away from the argument. I scream after him, “And this guy is still the mayor!? This town is screwed!” 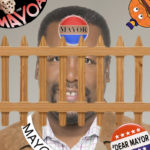