I open the door. Tuna races out and down the stoop, and I yell at her to return. She ignores me and rests in the middle of the road. The front right tire of a pale brown Volvo driven by a 35-year-old moustachioed man from 1940 runs over her, and then the car stops. I teleport to where she is. As I pick up her body, she splits into two distinct pieces. But she’s not dead. Each piece is a single, living cat, one of which looks like her while the other is a grey male tabby. She knew what she was doing with her apparent suicide. She had been burdened for too long with another personality, and she knew the only way to separate herself from him was to get hit by a car. Above us there is a lunar eclipse. As the moon moves away from the sun, it rapidly gets much larger and closer, to the point that I think it will hit Earth. It turns out to just be a very large atom. I fly to Colorado on a whim and attend a Denver Broncos game. I start saying “You know a clown isn’t allowed to…”. I pause and look around. There are clowns everywhere. I was going to finish with “try to kick the field goal at half-time,” but I catch myself to avoid the wrath of the clowns. 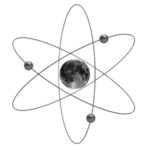