At a women’s soccer game, the home team scores in the final minutes, and a celebration ensues which involves all of the fans running out of the stadium through a guided path and picking up coffee and muffins at a balloon-filled table. They are finally led into a different stadium where a baseball game is taking place. I’m seated next to someone I used to be friends with. Neither of us says anything for awhile. At one point I say, “What’s up, [redacted nickname]?” He barely acknowledges me, but we talk for a bit. He asks me if I’m at the game alone, seemingly as a dig. I look at the big screen and see that it’s raining. Moments later the rain hits me and that is the cue for the umpires to call the game. We leave together and I ask him if he wants to grab a drink. He hesitates, so I say indifferently, “Or not, if you don’t want to,” and then he leaves. I run into Smitty Too and we end up seated at a table in a restaurant with two people across from us. A large white guy, whose movements lead me to believe is Rajiv, is blocking someone I assume is Newman, so I say, “Move your ass so I can see Newman.” Once it is discovered that Newman isn’t there, I apologize to the man, acknowledging that what I said was “extremely rude. I thought you were someone else.” He understandably doesn’t believe me so he challenges me to a fight. I have no choice but to accept, and so we are transported to a gladiator pit. We each have on our chosen uniforms, as an arena full of spectators cheers, preparing to watch me get killed. I choose a lance as my weapon, and my opponent, who is now Jason Mamoa, is weaponless but not intimated at all. The bell rings, I make one half-hearted swing with my lance, and as he blocks the attack I wake up. 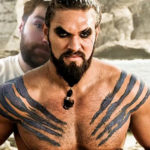