I attend a baseball game in a field in Pemberton. Based on the posters and other marketing, we are led to believe many professionals will be there, but it turns out that amateur children are the only players. I complain to one of the kids about the trickery, and he is rude, but rightfully so, since apparently it’s a charity game in support of Alice House. I apologize regretfully, but he’s having none of it. The game eventually becomes soccer. I’m able to sub in and get three quick goals, the last one right at the goal line, where apparently the field is contaminated. I’m told to coat myself in a synthetic antibiotic when I get home so I don’t become ill. 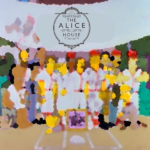