Bartleby Brothers was sitting on his front porch, playing with his toy truck, when he found himself looking around at all the other houses in his neighbourhood.

In each and every one of them lived one mom and one dad and one kid. Bartleby thought this was funny because they were all the same, and because he wasn’t like them.

He used to have a dad, named Bill, but when Bartleby was two years old Bill left on his motorcycle and never came back.

Bartleby’s mom, Brenda, was sad for a while, and she used to put more and more vodka in her drinks to stop being so sad, but it never worked.

Luckily, Brenda soon met a woman at the store, whose name was Beverly, and they became really good friends, and then they decided to get married.

After some time they both decided they wanted to marry other people instead, but they still liked each other as friends so Brenda and Beverly and Bartleby all lived together in the same house, and they were very happy.

Soon, Brenda married a new woman named Barbara, and Beverly married someone named Bonnie, and Bartleby suddenly had four mothers taking care of him. He was really lucky to have such a big family, and the five people living in the house all had a lot of fun together.

After their friend Bernice’s husband died from a pulmonary embolism, she moved in too, and she quickly found a wife named of Beth to share her bedroom.

Bartleby now had six mothers, and so he was never lonely. He always had someone to cook food with and play catch with and take him to the park, and he thought life couldn’t get any better.

But one day, somebody knocked on the door and Bartleby answered it. The woman standing in front of him looked familiar, but he couldn’t figure out from where. She started crying, which made Bartleby a little sad but mostly confused, and then she told him that she had had gender reassignment surgery and that she used to be his father, Bill Brothers.

Her new name was Bridget, and she finally wanted to be close to her son, so she started living in the attic.

Bartleby was happier than ever before, and even though some people didn’t understand just what was going on in his house, he was glad that he was different from the other kids that he knew, and he didn’t want any other life than the one he had with his seven mothers.

[Editor’s note: This story, “Bartleby Brothers and His Seven Mothers“, is the first in a prospective children’s book series about the many different family compositions. Below is the proposed first page of said book.] 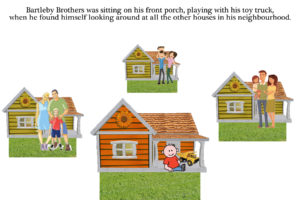