Okay, so the main kid, the one in the top left corner, him and his buddies get bullied a bit. They have like, a club – but the kid had actually died in the real world. Well, everyone thought he was dead, there were reports and stuff, but his mom, Winona Ryder, didn’t believe it and thought he was communicating with her through electricity. The older brother wasn’t sure if he believed her and was like “Okay, mom, sure…” and then I think people started to believe her after a while.

The kids are in a parallel universe of sorts where they all knew buddy was alive because they were hanging out with him. But in the real world he was dead.

There was a young girl their age in a lab – they were doing tests and stuff on her. She could move things with her mind, but she was scared.. they helped her escape at one point. The people in the lab were evil but probably thought they were doing it for good reasons. I don’t know if they found her or made her or whatever. She was moving things telekinetically. The scientists kept her in the room the whole time but were like, “We’re your friends, we want to help you.” But really they didn’t want to help. You know, it’s a common trope in this type of show.

Winona Ryder wrote letters on the wall so she could communicate, so, she was alright. The sheriff or cop – people didn’t like him or maybe I just didn’t like the look of him. One of those characters that seems like a bit of a jerk but was actually helpful in the end. He didn’t believe Winona Ryder at first so us, as the audience, were like “Oh you piece a shit, help missus find her son.” The thing with the sheriff: I guess he was in charge of the missing boy investigation or whatever. I don’t remember who else was in that story. He probably had a boss who wanted him to back to normal police work but he kept working on the case anyway. At one point he was kind of like, “Winona Ryder, get over it. Your kid’s dead. We were all at the funeral.”

Winona Ryder’s other son, the older one, he was spying on this girl that he wanted to have sex with I guess. Or maybe he was taking pictures of everyone, I don’t know. Then he saw her making out with her douchey boyfriend. She was kind of a nerd – she was kind of like the main girl in Freaks & Geeks where she didn’t have that many friends but then got this cool boyfriend and she went to this cool party and brought her boring friend, who would be the Millie. Actually, that’s not exactly what happened in Freaks & Geeks but it still works. So Millie in this show is like, “We should leave” and her friend goes, “I’m going to stay here for a bit.” So Millie sat on the diving board forever, then I think they changed the lights in the pool or something.

OH, and the monster! I totally forgot. There’s kind of weird stuff happening all movie but it’s all mostly possible and then BOOM, here’s this crazy monster. They were trying to kill it, they were shooting it with a water gun and somehow it worked in the end. Oh, they were under the sewers in a few episodes. Maybe there was like media in res, where they flash forward right at the beginning of the series to do some foreshadowing. This might have happened, because in the first and last episodes they had radiation suits on and they were crawling through the sewers, looking for this monster probably. I don’t know.

Winona Ryder – she might have had a boyfriend or something. It didn’t seem like the kid had a dad. It seemed like she was just in the same room the whole time. I think it was just that one kid who died. I don’t know what his buddies were doing. And! They were still getting bullied and stuff. The larger kid with the weirder face and the black kid were at odds at one point. But then it was important that they stuck together. They didn’t stick together before and bad things happened. It was a show about friendship and stuff.

The kid with the camera was kind of like the guy in American Beauty – like “Oooh, maybe she’ll fall in love with me after I take pictures of her.” But they became friends. They bonded over the monster thing. Her douchey boyfriend was like “blahhh” and she goes, “It’s not like that, we’re just friends”… and the other guy was like “Oh 🙁 I wish we were more than just friends.” They always have characters like that. Like, “Oh, he’s so misunderstood.” But maybe he’s just creepy. Just cause her boyfriend is douchey doesn’t mean this guy is best kind. Him and the boyfriend fought each other, or at least rolled around in the dirt for a bit. I don’t know why they tried to make him so douchey. They picked someone with weird big lips and that stupid haircut.

Hold on, did I mention, her boyfriend kept trying to pressure her to have sex and at one point they’re in her bedroom and she was like “Nooo, my parents are here.” And he like looks around and says “I don’t see them” – which was a great line. Then she was changing so she’s like “turn around” and he turns around and she takes her shirt off, but then he turns back around again so he’s facing her, and then they make out for a bit. And possibly have sex. I don’t know cause they cut to a new scene at the point where she was just in her bra, but he was probably trying to get his fingers into her bra.

I mean yeah, I guess it all worked out in the end. Maybe… Did he come back to regular reality? I remember in the last episode there was a newspaper clipping that said ‘Boy Comes Back from Alternate Universe.” And like, not even above the fold. It was on page six or something: ‘Kid Comes Back From the Dead’. Then right next to it, “Oh, I wonder what the Hi & Lois are up to?”

I seemed to follow the kids a lot. I think they might have been prominent in episode 5 – right in the middle of the screen – my eyes were drawn there. I guess they got back. Someone must have died… all this crazy shit was going on but I don’t remember anyone dying in a dramatic scene or anything. The kid and the bald girl kissed at one point even thought they were like nine.

The main guy who’s dead or whatever, his friend’s family was wealthy and proper but I don’t know what that has to do with anything. And the girl was going to live in their basement. Maybe he was in the basement the whole time and it’s like an Alice in Wonderland alternate basement universe. The kids help the girl escape after. I don’t know if she ended up living in the basement or not.

So there’s a scene where the kids’ Physics teacher or something explains how the alternate universe thing is possible, and he uses a tightrope as an example. The humans can go only up and back, but the flea can go up and back AND left to right. And you know where else the flea can go? Under the tightrope. And like, the b’ys were under the tightrope but still getting bullied. Their world seems half normal too.

So they needed a bunch of salt for some reason. Like 500 pounds of salt. They were trying to get enough conductive energy or something. It was like, “Where the hell are we gonna get 500 pounds of salt?” Then they ended up at a salt silo. like obviously, where else would you pick? If you need 500lbs of salt, makes sense go to the place where you get salt. With the protective suits, maybe the monster was radioactive or maybe the bald girl was. She’s bald by the way. I thought she was a boy. She looked like the kid in Boyhood. So I thought of that for a bit.

[Author’s note: Television shows, or whatever you call the new incarnation of serial serieses, are better than they have ever been. But there are too many of these AMAZINGGG programs these days, and there is simply no way to keep up. “You mean you’ve never seen Breaking Bad?” And devote two full days of my life to it. “You have to watch Fargo!” Another 10 hours. “There’s 2 seasons.” 20 hours. “Seinfeld?” 2 days, 18 hours. “Sopranos?” 3 days, 14 hours. You see where I’m going with this. Anyway, the first season of Stranger Things is another one that’s supposed to be really great, and I’m sure that it is. But I’m sorry. I can’t devote 6 hours of precious life to it’s consumption. There’s just too much else to do, watch, live, laugh and love. Since time is an illusion and I’m able to multitask, I have to decided to watch all 8 episodes simultaneously, subtitles included, which is the basis for the plot summary above. Here is how the screen appeared:] 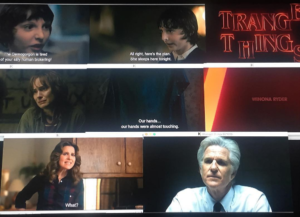