The landlord at Hayward isn’t very helpful when Romesh tries to get her to fix a fairly minor scratch in the bathroom mirror, so all the roommates make the collective decision to first sue her because of that, then charge her with neglect. The tenants rent a helicopter to airlift all of their things out from the roof because nobody trusts the front door anymore. I am the sound guy for a band composed of Romesh, Jonah and Pete, and I accidentally plug in the drums. Some people can’t handle the volume but overall it is well received. A guy at the show who I half recognize says to me in passing, “Hey man, if you can find a little girl for my roommate, he would be really into that.” So we all have to figure out if I should tell someone the guy was a pedophile or if we’re misinterpreting what he said because the kids have new synonyms these days. Eventually we end up on a tour bus, the back half of which is set up like a school bus, and I notice that more and more girls appearing in my field of vision are wearing very similar green sweaters. Each one I see, I point to it and go, “One. One green sweater. Ha ha ha!” voiced like the Count. I get up to eleven. 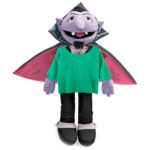