We’re at Upright Citizens Brigade in Los Angeles and the show consists of alternating sets from Hal and Reggie Watts. A female audience member gets kissed on the cheek during an improvised bit. It all appears to be in good fun until she starts saying how violated she feels. I’m nervous but still manage to come up with the great pun “Hide and Cheek” as the show’s title.
Afterwards, I lose my cane under a table outside. During the retrieval process, I reach for it at the same time as a homeless man. I need to prove to him that it’s mine by walking around with a convincing limp, using the cane for support. He isn’t sure if he believes me but I’m long gone by then.

[Editor’s note: After an intense brainstorming session with the dreamor, he was still unable to determine with certainly who Hal is. His best guess is Bryan Cranston’s “Malcolm in the Middle” character, but he doesn’t seem very confident about that. He does, however, assure me that the UCB Theatre is the one on Franklin, although he’s only been to the other one. I should also mention that he acknowledges the adjective describing the pun is unnecessary and incorrect, but he really wanted it left in.] 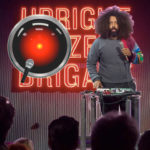