Steve takes Louie, Ed and I up in a plane so we can fly to Garibaldi. At one point we get lost in the clouds, and contact with the tower becomes choppy. We know there were a few other planes around so we have to be very careful. Steve keeps climbing as quickly as he can, in every direction, but we are just barely missing the mountain the entire time. Steve isn’t panicking, but he admits he doesn’t know what he’s doing. Eventually he lands pretty safely on a road that appears out of nowhere. We are a little shook up but luckily the plane turns into a car, and we end up in a supermarket parking lot. However, a group of young men approaches the car in an intimidating way, and since one of our windows is down, one of the guys reaches his hand in and grabs the iPod that’s playing Lauryn Hill’s “Everything is Everything”. I quickly snatch it back from his hand so him and his crew retreat to inside the supermarket. Since we are out of fuel, we have to get out of the car and enter the store. We load up our cart with several bottles of wine, and the leader of the gang comes out of nowhere and takes a couple out of our cart, hoping to steal them. Since we didn’t pay for them yet we don’t really care, but then the other gang members start threatening to smash our heads in with the bottles. I pick up two of them and start swinging them wildly and shouting heroically, deriving inspiration from Ryan on The O.C. when he pretends to out-crazy Volchek on the beach by threatening him with a broken bottle. The manager comes out to see what is causing all the commotion, and everyone else puts down their bottles immediately, so the manager only sees me acting crazy. Luckily, he understands what is actually going on because he knows the other guys. However, he still wouldn’t call the cops on them, since he’s an ex-con who was given a second chance at one point, and he’s well-respected by the gang, even though he went legit years ago. He leads me down an aisle as I plead for him to call the cops and he says, “It won’t do any good. If I call the cops these poor guys will all be locked up forever. It’s their circumstance. It’s not their fault. They need real help, and this isn’t how they get it.” He then rips my shirt, a Price is Right t-shirt that Louie gave me, but he only makes a minor tear, in a helpful way, because the only way I can get out of the store safely is if my shirt is ripped. Before he walks away, he smiles at me, but I say, “Hey, this is an $800 shirt!” I laugh so that he knows I’m only joking. He gets it. 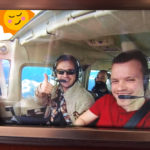